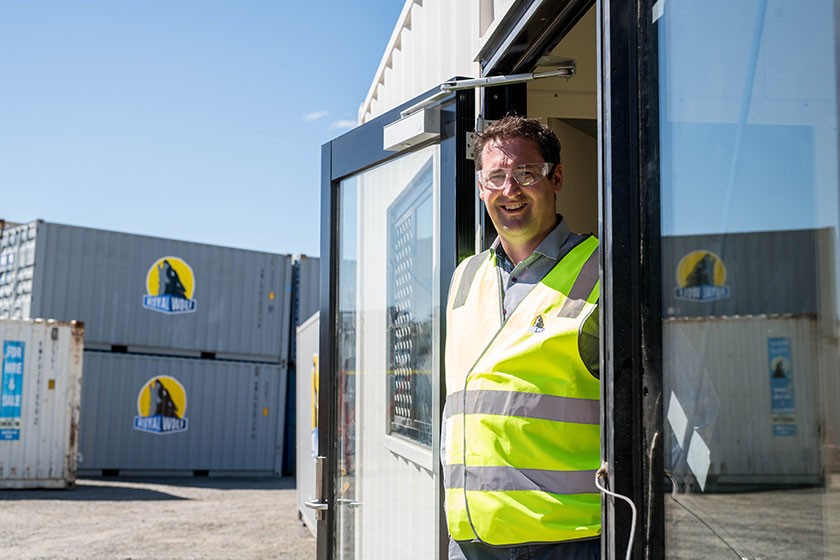 Royal Wolf Business Development Manager (Tasmania) Michael Nicholson is thrilled to be part of the project putting a roof over the heads of those who need it most. Photo: Alastair Bett

In the search for a quick and effective initial step to address a burgeoning homelessness crisis across the state, the Tasmanian Government knew it needed something out of the box.

To their surprise, what they found was that the box itself – in the form of repurposed shipping containers – was the innovative solution they needed.

And they already had an existing example to reference. More than 60 converted containers – fitted out and installed by national shipping container company Royal Wolf in early 2019 – were in use as accommodation for some 180 live-in students at the University of Tasmania’s (UTAS) Sandy Bay campus.

Under a $5 million Emergency Homeless Response initiative, the government last year contracted Royal Wolf, which has a depot just outside of Hobart, to supply more units, similar in style to their "pods" at UTAS, for use at emergency accommodation centres in the state’s south.

Housing the homeless, one bright idea at a time 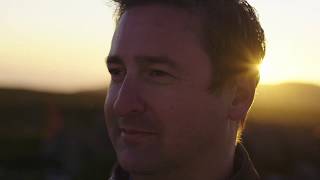 On January 30, the first of what will total 18 single-person pods custom-made by Royal Wolf was installed at Hobart’s Bethlehem House, a homeless accommodation service for men. A further 17 family-sized units – 10 of which will be supplied by Royal Wolf – will be put to use by the Hobart Women’s Shelter to house women and children fleeing domestic violence.

"They are a fully self-contained unit,” Mr Nicholson says. 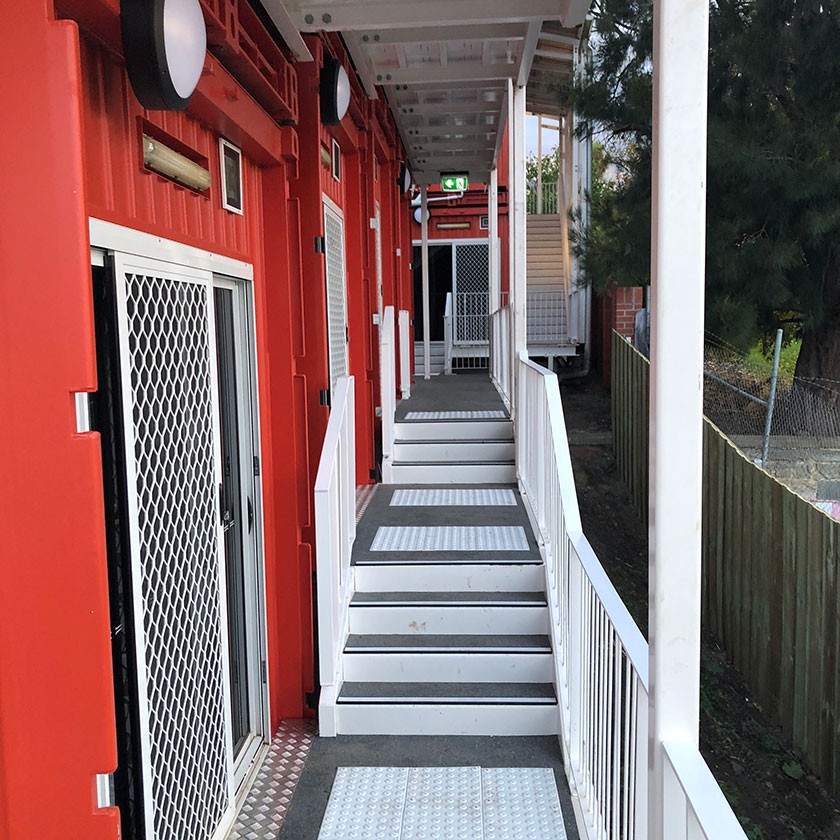 "In the single-person accommodation units, there is a king single bed, cabinetry, a kitchenette, microwave, fridge etc. Then behind the bulkhead of the bed is the toilet and shower. It’s all built seamlessly to come together as a comfortable unit.

"The women’s units have a little bit more detail. These 10 two-bedroom 40-foot units were specifically built for this program up in our Brisbane workshop and shipped here to be fitted out. There is a double room at one end and a single room at the other, with a complete kitchenette, bathroom shower, toilet etc. Once fully furnished these units will be ideal for both mum and kids.

"With the women’s shelter as well, they are using our platforms to form an outdoor space … somewhere to have coffee in the morning, or to socialise. (While) at the men’s shelter, the contractor is currently fabricating some stairs and walkways to put into place." 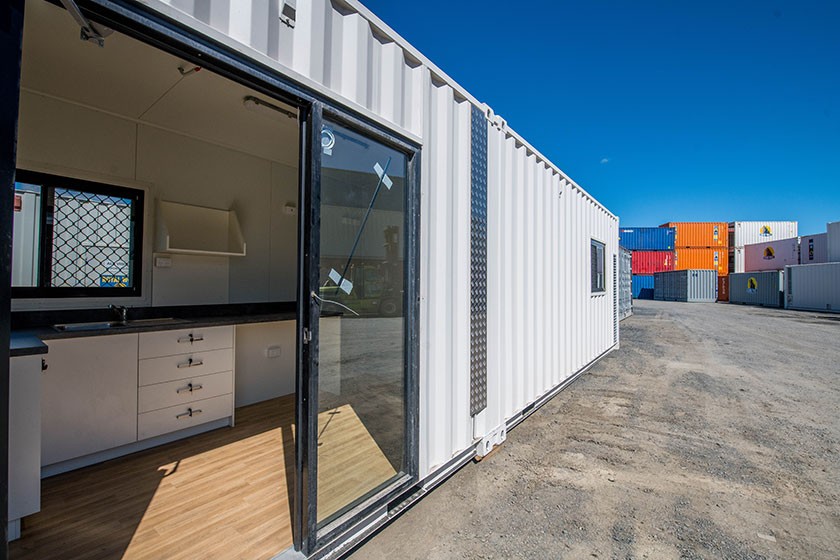 The 40-ft shelters are designed to accommodate a mother and children. Photo: Alastair Bett

Shipping containers – which became standardised in the 1950s as the preferred way to pack cargo – have a relatively recent history of being adapted for accommodation purposes.

Royal Wolf, for many years, has been repurposing containers as building site offices and lunchrooms, domestic and business storage solutions, and for use at festivals and other events as food kiosks and ticket booths. The company is a major national supplier of on-site accommodation for the mining and infrastructure sectors.

What is believed to be Australia’s first shipping container house – called the Future Shack – was designed by Aussie architect Sean Godsell in 1984 as something that could be built en masse, stockpiled and deployed following natural disasters or during a war.

"Everyone is trying to think of what they can do to contribute to make it home."

Internationally, the US deems itself one of the first countries to use containers for community housing with the Esperanza Farmworker Housing project in Washington. Built in the 1990s, it used 26 containers to house seasonal farm workers. But the Netherlands well and truly topped that in 2006 with a student housing development in Keetwonen, Amsterdam, that used more than a thousand containers stacked five-high. The UK and Canada have also built major container facilities to address public accommodation crises; while several individuals have incorporated shipping containers in private home designs, prompting what’s been called a "cargotecture" movement.

Back in Tasmania, Royal Wolf has left room for their accommodation pods to be personalised.  "Our clients will certainly be able to personalise them and really make them feel like a home," Mr Nicholson says.

At the men's shelter, where the pods will increase the facility’s number of beds from 27 to 45; even the local community is pitching in on the decorating. 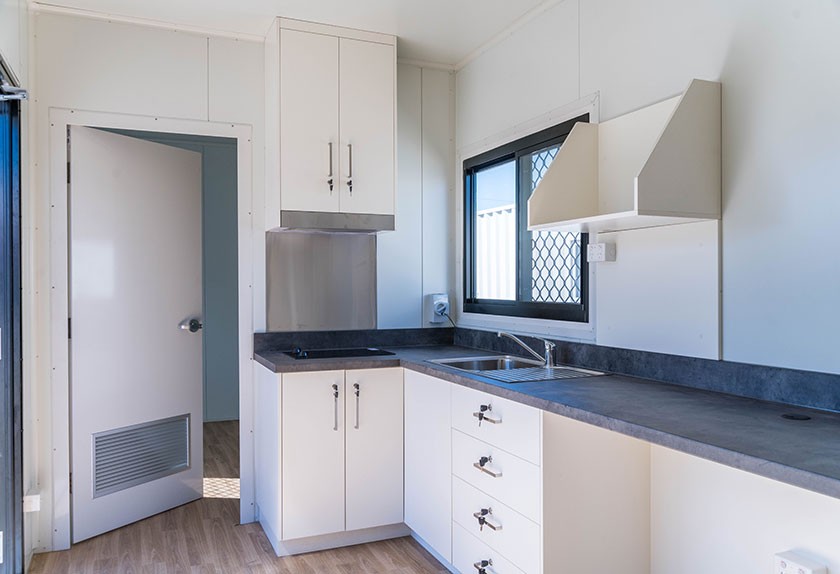 The shelters are equipped with a fully-functioning kitchenette. Photo: Alastair Bett

"We’re picking out curtains so that each pod has individual curtains – in a range of colours – so people can feel they are not in the same thing as their neighbour," she says.

"But we’ve also had people from the community coming forward to assist with making these pods homely. A quilters group from Hobart have been individually hand-stitching quilts for each of the pods. Then we’ve had gardeners come forward who have already been bringing in small plants and potting them up so that each pod has a plant in it, a living thing.

"Everyone is trying to think of what they can do to contribute to make it home."

Mrs Kirkman Meikle grins warmly.  "I love it," she says. "It’s great to be part of an initiative like this. It’s exciting. Everybody knows that we’re doing something good. Everybody who has been involved in it is happy to be doing something with such a tangible outcome." 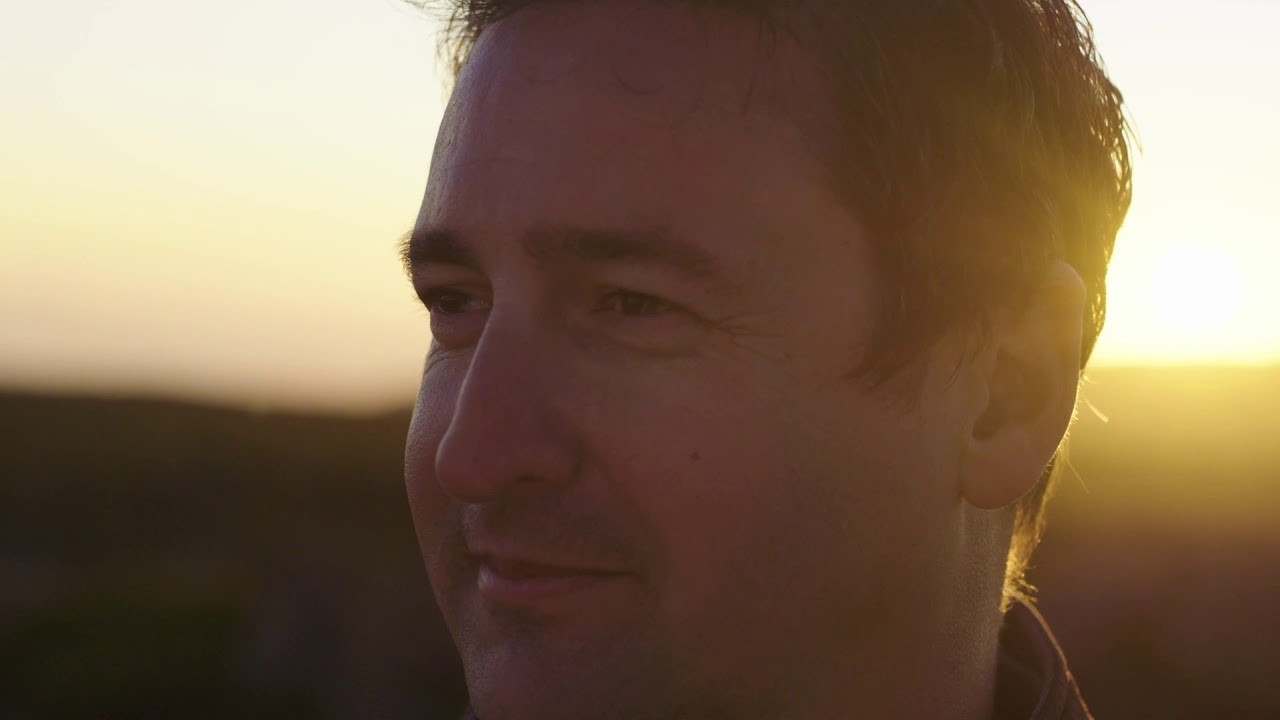 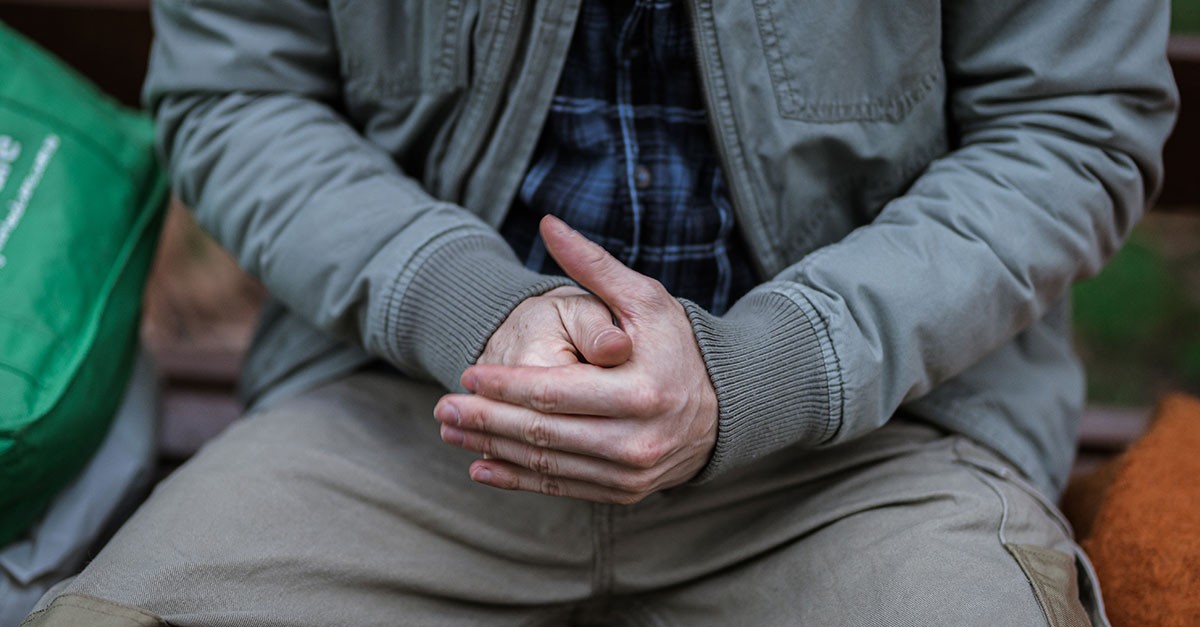 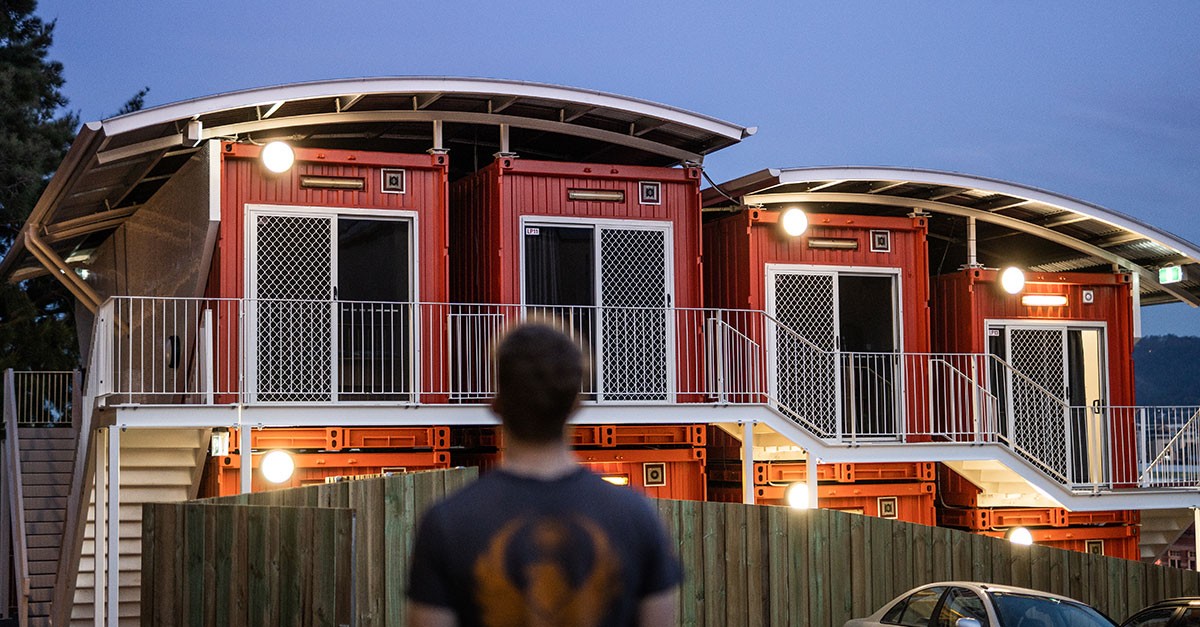 Just when you thought shipping containers were just containers for shipping