When the a large gold mining operation business needed a large, all weather maintenance workshop to service the massive trucks used on the site, it turned to Royal Wolf, the leading supplier of container solutions across Australia and New Zealand, for the answer. The client’s requirements for the site were daunting. 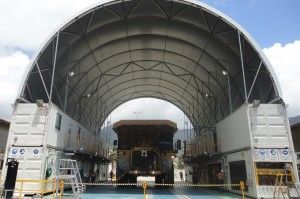 With a footprint of some 500 square metres and a clearance height of 15 metres under an engineered fabric dome for the largest of the dump trucks, the structure also had to be relocateable, transportable, and easy to assemble. Not to mention an extensive list of facilities including offices, workshop, training rooms and storage. Michael Lowe, Royal Wolf National Manager, Mining took up the challenge. “The complexity of the project was twofold - both the container modifications for the facility as well as the challenge of ensuring ease of installation in a remote site” says Lowe. Following award of the contract in December 2012, installation was completed and the facility fully operational in July 2013, a timeline only achieved through close collaboration between the client, Royal Wolf and project consulting team. The end result is a facility of huge benefit to a remote mining operation in difficult terrain, made possible by the inherent advantages of Royal Wolf shipping containers and smart engineering design.